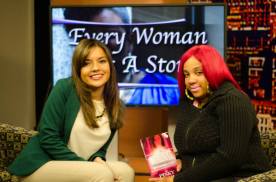 Ricketta Pryce talks to EWHAS about her book “The Hustler’s Daughter”. 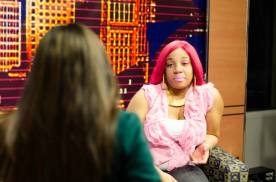 Ricketta Pryce goes by “Pinky Dior” in the literary world.

Pen and paper are no stranger to twenty-two year old Ricketta Pryce. With a great passion for writing, Pryce has been putting these tools to good use since junior high. By 9th grade, her literary fate was indeed promising. She had completed her first manuscript and friends and family began to refer to her by the literary alias: Pinky Dior.

“I let a few of my classmates and teachers read it [the manuscript] and they said it was really good for a first book so I went on and tried to get it published.”

The manuscript is one of the eight unpublished stories that Pryce has worked on since then. Today, she also has eight published short stories, the most recent being The Hustler’s Daughter. However, Pryce points out that writing all these books haven’t necessarily guaranteed financial success.

“People think my life is perfect but it’s really not.”

And understandably so. Pryce currently lives in a shelter and aside from writing urban fiction, she dedicates her time to her year old daughter Mercedes. She moved out of her mother’s home and into the shelter early in her pregnancy. Two weeks after her delivery, the father of her child was imprisoned.

“There’s been a lot of distractions, it’s depressing but I just keep going.”

Pryce continues to look to urban fiction as a redeeming grace and hopes to have her book, The Hustler’s Daughter, made into a film.  She will not stop until her childhood dream is fulfilled.